At the start of any project I like to outline the design values that I want the project to encompass. It’s good to have a list of things to focus back one when developing a game, to ensure that I don’t stray away from the core vision.

For The Subject, I settled on three core values that I want to shine through during the development process:

The last bullet point is what I want to spend the most development time on. As a writer I’ve done a lot of work for theatre in the past, but have never written anything for an immersive project such as this; it’s incredibly exciting. I have a rough idea of what I want the story to be, but I have more of an idea about how it will be structured, and how I will deliver the story to the players.

In this project I want to create a small-scale immersive theatre set and cast the two players as the actors, rather than the audience. Much of the story will be present in the environment, but also acted out by the players; pieces of the narrative will be hidden in the puzzles, and by solving the puzzles the players will uncover the story, in much the same way the progressing through mainstream videogames rewards the players with lore tapes or books or other curios. 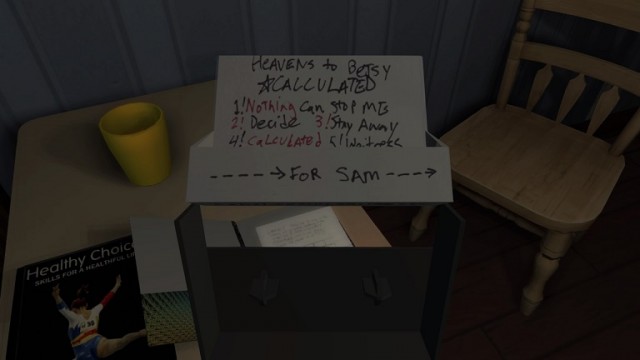 Gone Home is basically an immersive theatre piece in which exploration is rewarded with a deeper sense of the story. Also it's beautiful and you should all go and play it.

Since storytelling will be done through discoverable snippets and clues that won’t immediately be obvious, they could be missed if a player isn’t perceptive enough. Also, just as the puzzles require teamwork to complete, piecing together the story will require communication and thought. I want players to walk away from the experience discussing the story and trying to piece the threads together for themselves - or even better, play the experience again with a greater focus on the story.

I think I’m being quite ambitious with my approach to emergent storytelling in this project, mainly because of the limited space inside the box, and the limited time the players will have to explore the world compared to other immersive theatre pieces. Yet another challenge that I am well up for completing.